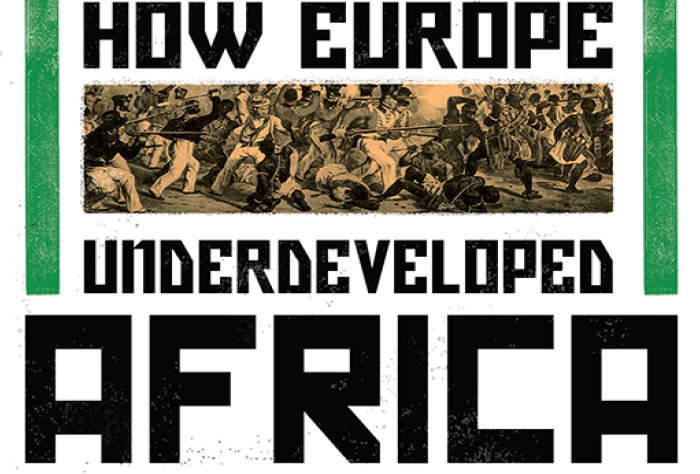 On November 17th, we will discuss Walter Rodney’s 1972 classic book “How Europe Underdeveloped Africa”. This is an online event, which will be held via videocall. Anyone is welcome, but we keep link details private – please contact us for the Zoom details. The book is part of a series on how modern inequality was built which included Silvia Federici’s Caliban and the Witch, David Graeber’s Debt and Jason Hickel’s The Divide – but you do not need to have attended preceding events to join us to discuss Rodney’s book.

Walter Rodney was a leader of Black Power and Pan-African movements, including the Guyanese Working People’s Alliance. He was internationally reknowned as a historian of colonialism – and for linking struggles for independence on the African continent with struggles of working class Black people in North America and the Caribbean.

“How Europe Underdeveloped Africa is an ambitious masterwork of political economy, detailing the impact of slavery and colonialism on the history of international capitalism. In this classic book, Rodney makes the unflinching case that African “mal-development” is not a natural feature of geography, but a direct product of imperial extraction from the continent, a practice that continues up into the present. Meticulously researched, How Europe Underdeveloped Africa remains a relevant study for understanding the so-called “great divergence” between Africa and Europe, just as it remains a prescient resource for grasping the multiplication of global inequality today.” – publishers, Verso

Stroud Radical Reading Group events are free to attend. You are welcome to attend to listen to the discussion even if you do not have time to engage with any of the content. Free resources are listed below, but if you can, please buy a copy of the book from the Yellow Lighted Bookshop using the following link (adding the “StroudRadical” Coupon Code will get you 10% off the £16.99 standard price): How Europe Underdeveloped Africa by Walter Rodney.

This site uses Akismet to reduce spam. Learn how your comment data is processed.

Stroud Radical Reading Group meets once a month. Here you can find details of sessions, links, and further information